Recently there are customer asked us how to use press needles acupunture? i settled many questions i recieved to answer, the question is also the application of press needles, you can take them as reference. if you have health problems same with them, i believe you can find a way from their experience.

Q:  What is the name or style of the very short acupuncture needle with a spiral circle shape at one end that was left in my back and was covered with warerproof tape? I had 8 of that type of wonderfully relieving needles inserted into my lower back muscles close to both sides of my spine starting at L5 spaced upwards a little over an inch away from each other.,There was an immediate relief of pain, giving me the ability to turn over and sit up straight on the doctor's table with no pain or restrictions. There was no pain getting dressed or even putting my shoes or socks on. I was able to wash dishes with no burnning, lightly rake leaves, play the piano without having to stop after 15 minutes due to that burning, debilitating pain. I left them in for as long as the tape would hold, a little over two weeks with no pain  at all. I was in California visiting relatives when I received the needles from the acupuncturist and should have kept her information,  but I lost it otherwise I would've called her back.  Is a person allowed to put needles in one's  own back because I cannot find an acupuncturist in Massachusetts who will leave the needles in for me.

A:  These needles are called press needles. They have a taped back so that the needle can be inserted and left in place. These tend to be more associated with some of the Japanese styles of acupuncture where slightly less deep insertion and less needle action tend to be the norm. Your best bet is to try to find someone in the area who does this, and although we are in the UK and not really that aware of the distances involved, when we typed 'Japanese Acupuncture Massachusetts' into google it offered as the primary recommendation Kiiko Matsumoto, an internationally renowned practitioner for whom we have great respect in the UK. Her lectures and seminars here are always over-subscribed. We are absolutely confident that she will be able to recommend someone, if not herself, who can replicate the success of your earlier treatment.

We are not fully conversant with the local licensing issues on Massachusetts, but one major problem with leaving needles taped in situ is that the tape is not always that enduring, and when someone gets wet, or sweats heavily which can happen in the lower lumbar area, the tape can detach. Many practitioners are justifiably concerned that a needle which drops off and on which someone then stands by accident could be the source of a claim for damages. Anyone who stepped on a dislodged needle would be pretty much able to blame anything on that for years to come.

We wouldn't recommend putting needles in yourself. Although there has been a tendency for formula acupuncture to be on the increase over the last decade, there are some very powerful points in the back which may have an unwanted effect on the system as a whole. For a long time we have been quietly critical of doctors who use a specific point to treat tennis elbow without accepting that the point can often dramatically reduce blood pressure if over-stimulated. Treatment really needs to be done by a professional who both knows what they are doing and also knows what to avoid. 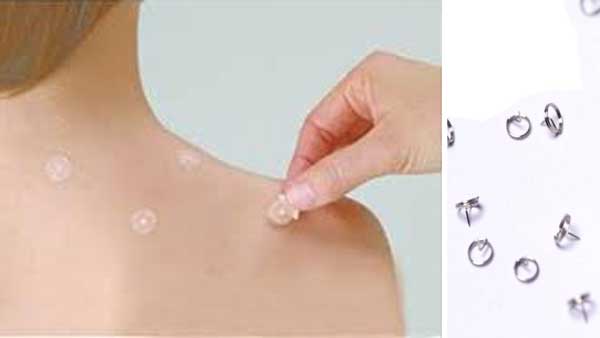